A now-viral video has been making the rounds of what many say is a real-life sighting of an actual werewolf in Africa, which was apparently shot dead ... but the whole thing is BS.

The clip that's got people buzzing surfaced seemingly out of nowhere this week, and it shows what appears to be the body of a lycan -- subspecies of a werewolf in monster mythology -- dead on the ground in the middle of the night, bleeding from its face ... lying motionless.

What kind of animal is this again ? pic.twitter.com/h6YMnd6SWG

There's a man narrating, speaking in what seems to be Hausa -- which folks took to mean this alleged killing took place somewhere in Nigeria ... and it's freaking everyone out.

Different users saw this and spread it like wildfire -- warning locals in the area to be on the lookout, sounding the alarm without really questioning the source ... or its veracity. Luckily, somebody came to the table with the truth -- and that would be ... this is a big fat hoax!

The clip that everyone is seeing is dubbed over, as the original is actually part of what seems to be a short film from Portugal called "Lobisomem Morto a Tiros" ... which translates to "werewolf shot to death." Very original, we know. It was thrown up on April 1 by a user named Cloud Wolf ... who's got an entire YT page dedicated to the legendary creature.

As for how the hell this thing *looks* so real ... you can chalk it up to great SFX work, courtesy of freelance sculpture artist Joseph-Rob Cobasky -- who's got photos up on his IG with his creation on the table (Frankenstein-style). Obviously, it's a top-notch job -- especially since everyone thought it was the real McCoy. A testament to the quality, indeed.

The makeup team from "An American Werewolf in London" are probably nodding with glee -- 'cause Joseph's take on a werewolf ain't all too different from what they cooked up in '81.

Anyway, nothing to see here, people -- back to Bigfoot and Loch Ness sightings, please. 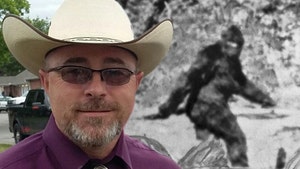 You Might Want to Rethink Weird News Movies Viral