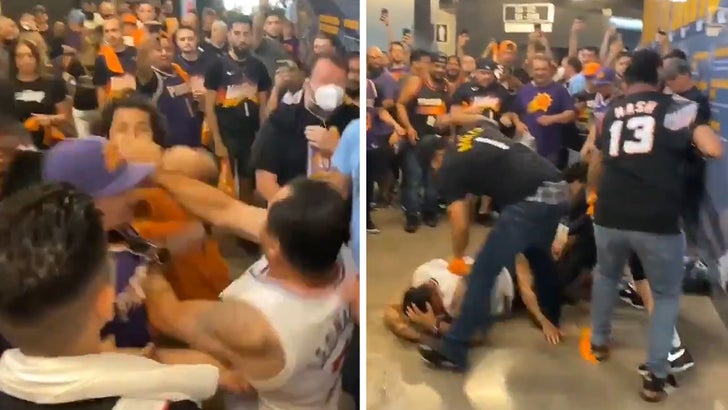 11:48 AM PT -- The Suns addressed the brawl in a statement Monday morning ... saying, "while the intensity on the court continues to heat up, we still expect Suns fans to keep their cool off the court."

"We will not tolerate the violence that erupted following Sunday's game at Phoenix Suns Arena."

The team continued ... "We consider Suns fans to be the best in the world. Fighting or taunting to incite violence is not reflective of our organization or how fans from across the Valley should be represented."

"We're better than that. Let's work together to provide a model fan experience that is fun, enthusiastic and respectful."

Suns and Clippers fans got into a VIOLENT altercation during the first game of the two teams' playoff series Sunday ... and the insane fight was all caught on video.

The wild action appeared to go down in the bowels of Phoenix Suns Arena in Arizona ... when two Clippers fans got into a screaming match with a bunch of Suns supporters.

You can see in footage filmed by a bystander ... the two L.A. fans -- rockin' Kawhi Leonard jerseys -- yelled for several seconds before they let their hands fly.

One of the Clippers fans threw a big punch at a Suns fan -- before he was eventually taken down to the ground.

And then, all hell broke loose.

More than half a dozen people were involved in the fracas ... with haymakers being thrown and landed left and right.

It's unclear if there were any injuries or any arrests made ... we've reached out to police, but so far, no word back yet.

Of course, this is the second big fight the Suns have seen this month ... you'll recall, it was less than 2 weeks ago when the "Suns In 4" guy wrecked a Denver Nuggets supporter during the team's previous playoff series.

Most disrespectful moment here was “Suns in 4” pic.twitter.com/piYbub2nQa 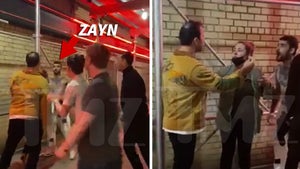