The driver who struck and killed NFL coach Greg Knapp has reportedly been cleared of any wrongdoing ... and will not face criminal charges.

58-year-old Knapp was riding his bicycle in San Ramon, CA on July 17 ... when he was hit by a car and rushed to the hospital with severe injuries.

Knapp -- who had just been hired to be the New York Jets' passing game coordinator -- tragically passed away on July 22 ... a loss that was felt throughout the NFL community.

You'll always be with us, Coach Knapp. pic.twitter.com/JYecyVQvqZ

The incident was investigated by San Ramon PD and sent over to the Contra Costa County District Attorney's Office ... which declined to pursue charges.

"The San Ramon Police Department's investigation has concluded and it was submitted for review," the police said in a statement to Danville San Ramon.

"We received official word from the Contra Costa County District Attorney's Office that they will not be filing criminal charges on the driver involved in the collision."

The DA's office explained the decision to the New York Post on Friday ... saying, there was "insufficient evidence to satisfy the requisite standard of criminal negligence on the part of the suspect driver."

Officials do not believe drugs or alcohol were a factor ... and the driver was fully cooperative with authorities.

Knapp was beloved amongst players and coaches throughout the league -- he won a Super Bowl ring as an assistant with the Denver Broncos in 2016, and is survived by his mother, wife, brother and 3 daughters. 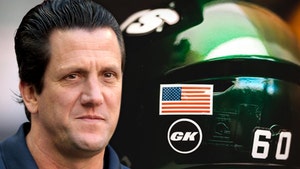