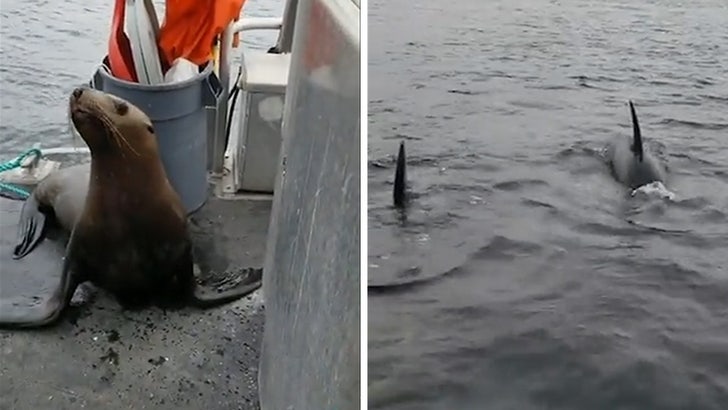 A woman got an unexpected (and apparently unwanted) visitor during a boat trip -- it was a sea lion fearing for its life ... who tried hitching a ride as orcas started to close in.

Watch this wild encounter that was captured by a woman who goes by @nutabull on TikTok and lives on Vancouver Island ... where there's plenty of this type of action in the open waters.

Her videos start with the animal already aboard -- which startles her, 'cause she doesn't know where the heck it came from, or how it made its way up. This pinniped's got hops! 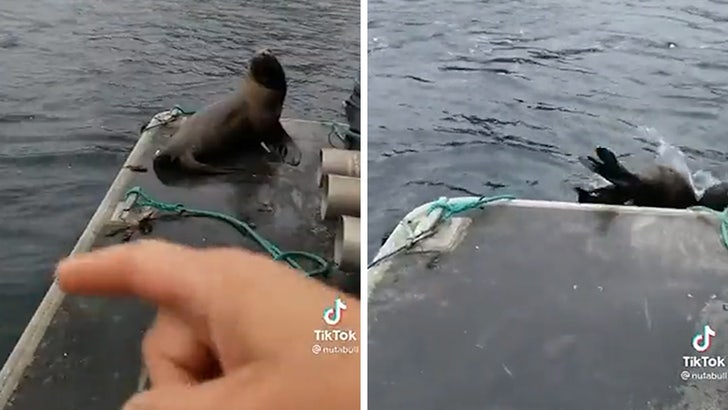 Another thing she immediately recognizes in the distance ... that she and/or her vessel are becoming the epicenter of a pod of killer whales that were starting to circle ... seemingly in pursuit of this little guy, who might normally become fish food in the wild.

The orcas get right up against the boat and start to pop out to take a peek at their would-be meal ... who's in no rush to get back into the water, despite this woman demanding he scram.

It's honestly hilarious, but also kinda sad -- because we all know damn well that as soon as it jumps back in, it's almost certainly going to be eaten. There's at least like 3 whales there!

She had wayyyyy too much patience. The seal is getting yeeted pic.twitter.com/Ycg8eb880E

We don't wanna spoil the ending. But, let's just say ... rest easy, sea lion. You lived a long and prosperous life, were sure. Ah damn it -- guess that sums it up. BTW, this woman's rationale for giving it the boot is pretty funny too ... replying to someone in her comments.

Sounds like she chose endangered species ... over one that's in abundance. 😅 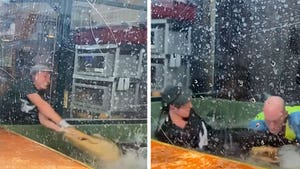 Pets You Might Want to Rethink Humor Insane Videos Viral