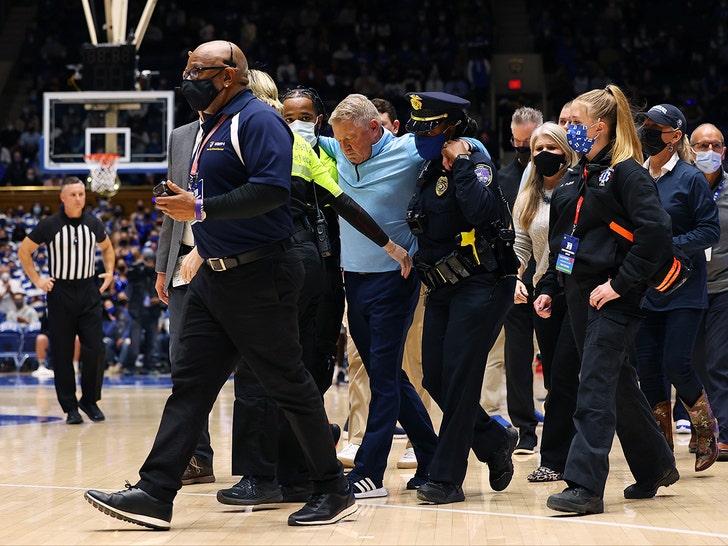 Horrifying moment during the Citadel vs. Duke game on Monday ... Bulldogs head coach Duggar Baucom collapsed on the sideline and needed to be taken to the hospital.

It all went down at Cameron Indoor Stadium ... when just a few minutes into the first half, Baucom terrifyingly crashed to the floor.

Here is the video of Duggar Baucom after collapsing on the court... It's not graphic, just shows how sudden it was. He is walking off, with assistance, under his own power. Such a scary situation. He's a wonderful man, truly hope everything OK with him. pic.twitter.com/gyV8fIIHtw

You can see in video from the arena, trainers and players rushed to the 61-year-old, who was eventually helped off the court and taken to Duke University hospital, where he stayed overnight for further evaluation.

Fortunately, Bulldogs assistant coach Jack Castleberry -- who took over for Baucom during the game -- said after the contest that Baucom was "coherent" and was "as good as he can be" considering the circumstances.

This is the statement that describes the Duggar Baucom situation perfectly. The Citadel's acting head coach Jack Castleberry on his boss. Baucom's toughness. What happened tonight. What he means to his players and the game of basketball. pic.twitter.com/KINvbRY4Rs

"He just said he was in pain," Castleberry said. "You can tell with the look in his eyes that it was very, very genuine."

After the 107-81 loss, the team said that Baucom -- who is in his 7th season with the Bulldogs -- is expected to be fine and is scheduled to travel back with the team Tuesday.

"The Citadel Head Coach Duggar Baucom is alert and in good spirits," the team said in a statement.

"He is scheduled to return back to Charleston with the team Tuesday morning. Our thoughts and prayers are with Coach B and his family at this time." 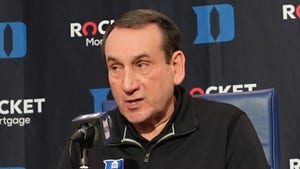