Two Bills players were so incensed with a reporter's question following their loss to the Patriots ... one of them asked the media member straight up, "What are we doing, bro?!"

Jordan Poyer and Micah Hyde -- two of Buffalo's best defensive backs -- took the podium after losing 14-10 to New England ... and it didn't take them long to become upset with a media member.

Jordan Poyer and Micah Hyde were not happy when asked if they were embarrassed by the run defence tonight. pic.twitter.com/5lwqZ8CRyh

The journalist in the crowd asked the two if they felt "embarrassed" after losing the game -- 'cause, after all, the Patriots won it despite only throwing THREE TOTAL PASSES.

"I mean, what kind of question is that?" Poyer said.

The reporter, though, stood by his question -- which enraged Poyer and Hyde even more.

Poyer eventually ended up answering the question ... but seemed to railroad his offense in the process. Hyde, meanwhile, never answered it -- choosing instead to tell the reporter, "We'll remember that."

The Patriots, meanwhile, sure were having fun over the weird way in which they won the massive AFC East showdown ... with Matthew Judon playfully clowning Mac Jones for his unique night under center.

"Hats off to the offense... besides Mac. He really didn't do nothing" 😏 pic.twitter.com/PYF1N29dVs

"Hats off to the offense," the star New England pass rusher said. "Really everybody. Probably besides Mac. He really didn't do nothing besides hand the ball off." 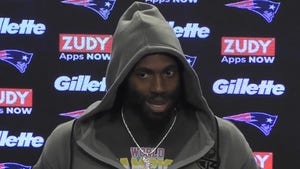 Patriots' Matthew Judon Craps All Over Mac and Cheese, Get It Off The Table!