Alicia Keys helped Jay-Z earn his first No. 1 song back in 2009 with "Empire State of Mind” -- an accomplishment she now calls a gift and a curse, because they both fear they can't repeat it.

Alicia told E! ... she and Jay consider doing new songs together all the time, but immediately grow hesitant when they consider all the damage “Empire State of Mind” did on the charts, and in the culture.

Alicia released a sequel the next year, which was just her version of 'Empire' without Jay rapping.

Jay is no stranger to bowing out gracefully after knocking it outta the park. He and Eminem haven’t rapped together since their 2001 infectious “Blueprint” duet “Renegade” … and after a 2006 Grammy win, he never followed up with Linkin Park.

Ironically, their spouses Beyoncé and Swizz Beatz have linked up for numerous bangers over the years. Sounds like Alicia and Jay should take notes!!! 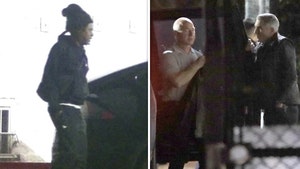