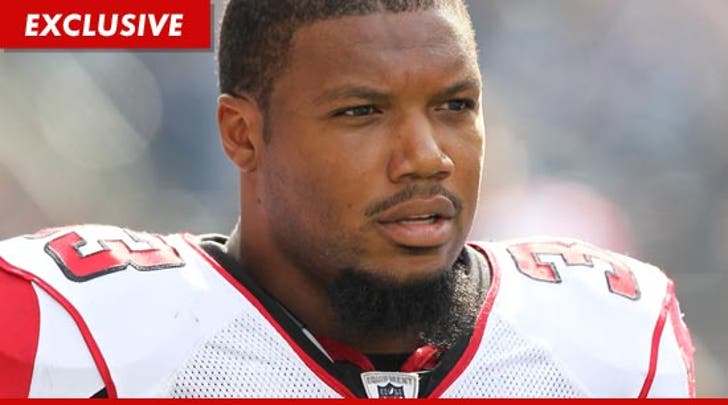 Atlanta Falcons superstar running back Michael Turner broke up a girl-on-girl BRAWL in front of his home yesterday ... when his new GF allegedly attacked his baby mama with a golf club ... TMZ has learned.

Cops were called to Turner's Georgia mansion Monday afternoon ... and discovered 32-year-old Rasheeda Walker in front of the home ... bleeding from the side of her head.

According to the police report, obtained by TMZ, Walker claims she has 2 children with Turner and is "upset because he refuses to see them." She also claims she's pregnant with Turner's 3rd child and wanted to talk to him about the situation.

Walker told cops she knocked on the front door ... only to be ambushed by Turner's new GF Elizabeth Delacruz ... who was wielding a golf club and shouting, "YOU AT MY HOUSE NOW B*TCH."

Walker claims she grabbed the golf club away from Delacruz and the two began to fight ... until 5'10", 244-pound Turner came outside and broke the whole thing up.

According to the report, Delacruz told a slightly different story ... telling cops she only grabbed the golf club AFTER Walker sneaked into the house through an unlocked back door.

Cops report both women were scratched up ... and both suffered minor head wounds.

Both women told cops they did NOT want to press charges ... but Walker was issued a criminal trespass warning and advised not to return to the home. We reached out to Walker -- but she had no comment on the situation.

We also called Turner's reps for comment -- so far, no response.