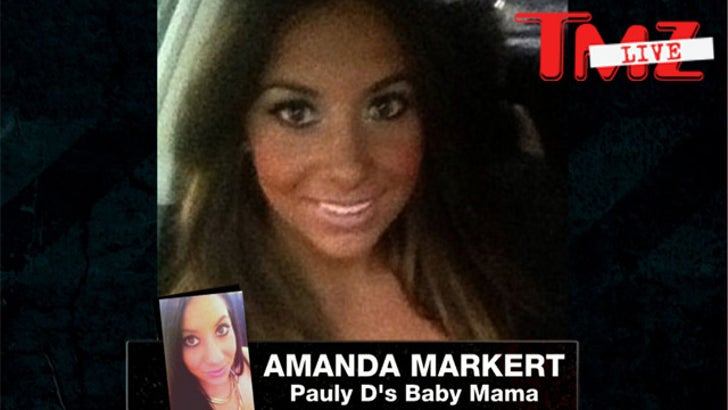 The chick Pauly D knocked up claims she's no longer looking for a custody war, and is now willing to accept co-parenting with him -- but TMZ has learned the "Jersey Shore" star has serious concerns about another guy in her life.

Amanda Markert called in to TMZ Live to talk about Pauly's fight to gain full custody of their 5-month old daughter, Amabella -- and said, "I would hope that no one would ever want to take an infant away from her mother, and I'm hoping that she can have 2 parents in her life that can get along together."

That's a huge shift -- as we first told you, Amanda and Pauly basically hate each other -- and she confirmed they've had no relationship whatsoever since their one-night stand in Las Vegas.

Sources close to Pauly tell us one of the reasons he wants full custody is because Amanda's first baby daddy (of her 5-year-old son) is currently a wanted man for felony drug charges.

According to a Florida police report ... he was busted for DUI after a car accident, and police say they found him at the scene with bloody needle marks in his arm, and methadone pills -- commonly used to treat heroin addicts.

He skipped a court hearing, and now there's a bench warrant out for his arrest -- but Amanda explained she's already taken steps to protect herself and her children from the guy.

Amanda may want peace, but ... watch the clip. This is ain't no rom com.