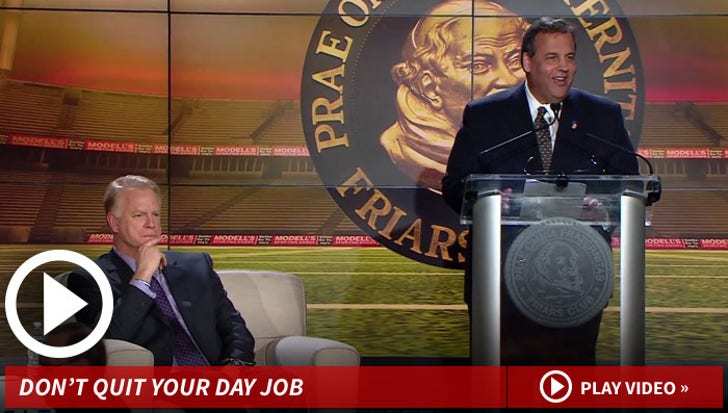 Like a commuter trying to cross the George Washington Bridge, Chris Christie's attempt at comedy last night came to a grinding halt at the Roast of Boomer Esiason in NYC.

The Gov. took the stage at the legendary Friars Club to roast the former NFL star and quickly learned the first lesson of comedy -- don't do it unless you're actually funny.

-- "When I was approached about doing to this event, I said yes right away. I said listen, 'I''ll do anything for Super Bowl winning quarterback Boomer Esiason' ... and then i said, ya know, he didnt win that game did he? That was Joe Montana that won that game." [Boomer looks at his watch].

-- "Look at this dais ... I mean Robert Wuhl, seriously? I mean at this point, Robert will show up for anything."

-- "I mean I've seen bigger stars after bumping my head."

-- "What happened? Were Screech and the dog from Frasier busy today?"

And the Joke de la Resistance ... Christie PRETENDED like he was going to announce his candidacy for President of the United States ... but then, CURVEBALL!!!

Ya gotta watch the clip ... it's about as funny as learning your governor just misused Superstorm Sandy funds.