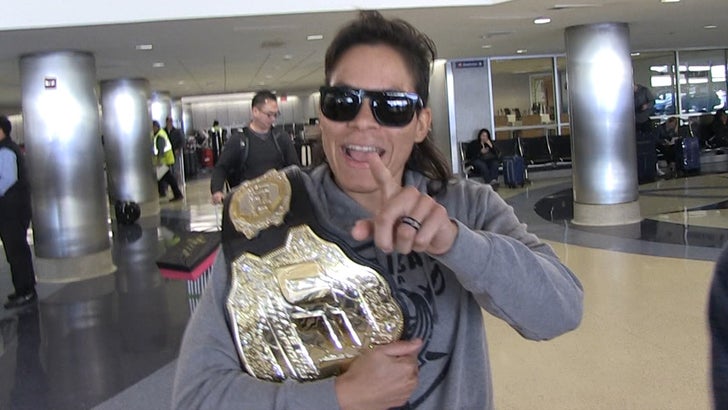 Great video of UFC superstar Amanda Nunes ... strollin' through the airport with her 2 favorite things -- her girlfriend and her CHAMPIONSHIP BELT!!!

Amanda and Nina Ansaroff landed at LAX following Nina's big victory at "UFC Fight Night" in Phoenix on Sunday ... and they were both still riding high off the win.

Nunes also told us she believes she can continue to destroy people like she did Ronda Rousey ... and prove to be even more dominant than Conor McGregor.

As for Ronda ... Nunes says she doesn't feel bad at all for the beatdown she put on the UFC superstar -- but says if Rousey wanted to talk things out, she's down to have a conversation.

The grappling pays off as @NinaAnsaroff gets the back and sinks in the RNC!! A FINISH for her first win in the Octagon! #UFCPhoenix pic.twitter.com/EebZgRbSPH