Stack wasn't too in the know on college basketball's recruiting scandal when we got him at LAX ... but he told TMZ Sports he was 100% behind the idea of NCAA hoops stars makin' bank.

"If you can go to war at 18 and kill yourself, why you can't get paid for basketball?"

S-Jax thanks the lord he didn't have to be a broke college athlete ... even though it took him years to make the NBA outta high school. 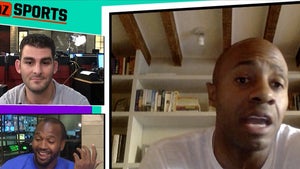 Jay Williams: I Was Offered $$ During College Recruiting, Turned It Down