All the Conor McGregor haters can take a seat ... 'cause Conor was just being a boss when he WENT OFF inside the cage last week -- so says Kimbo Slice's son.

"Baby Slice" fought at the Bellator Dublin event where McGregor got violent with MMA officials ... and says the UFC mega-star should get a pass for his outburst.

"I think that was pretty funny, man," Slice told TMZ Sports. "C'mon. We was in his hometown, his city. He probably felt invincible, think he can do what he wanna do. Probably can there."

FYI, Conor issued a "sorry not sorry" apology on Tuesday ... and no official punishment's come down from the UFC -- yet. 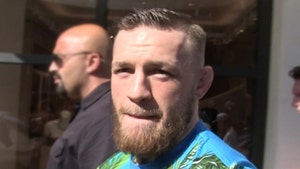 Conor McGregor: Sorry For Losing It In Dublin, But The Ref Sucks