Weekend Update hit the Prez hard on the government shutdown, but the Stormy Daniels commentary was hilarious.

Michael Che mused that Trump's comment to Stormy that he was afraid of sharks was understandable, because he has the body of a seal.

And check out Cecily Strong as Stormy herself. Super funny.

On the government shutdown, Colin Jost observed even a fake government -- "House of Cards" -- didn't shut down after Kevin Spacey was booted from the show. 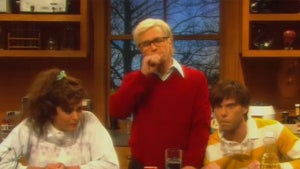