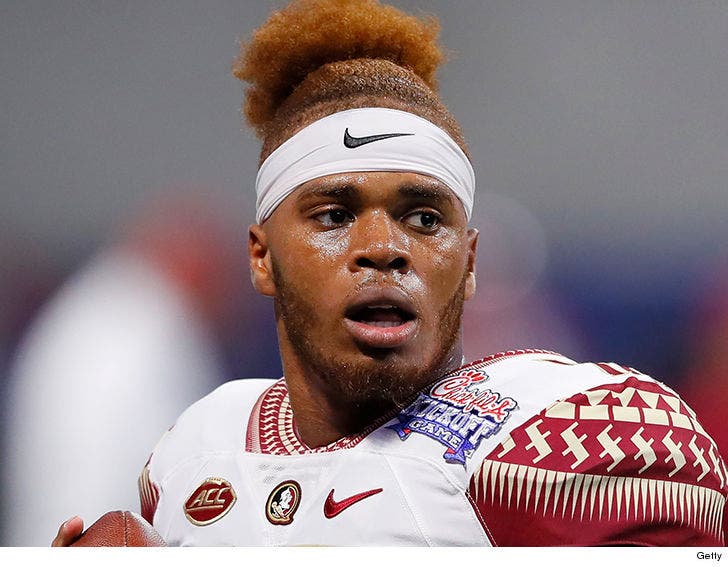 1:30 PM PT -- Tallahassee PD tells us Francois is no longer under investigation ... which means Francois and his girlfriend will not face criminal charges from the incident.

Florida State University QB Deondre Francois told police he's the VICTIM in a domestic violence incident involving his pregnant girlfriend ... and only got physical with her in an effort to restrain her.

It's all in the police report obtained by TMZ Sports ... which shows cops responded to the QB's Tallahassee apartment late Tuesday night, an apartment which he shares with his GF.

Deondre claims ... he was hanging out in the apt. with fellow FSU football player Zaquandre White when his GF entered the pad and started going off on him over a previous argument.

Deondre told police his GF began to smash items, including a vase -- and then tried to pull the TV off the wall. That's when Deondre says he tried to "stop her by picking her up like a hug" to carry her outside so she couldn't break anything else.

Deondre says the GF began to "swing" on him, so he let her go. He claims the woman began to rip her own shirt while threatening to call the police and report domestic violence.

Deondre says that's when he called police himself to respond to the scene. When cops arrived, Deondre's friend, Zaquandre, corroborated every detail of Deondre's story.

But, the GF tells a completely different story ...

She told cops Deondre was upset that evening because another guy tried to talk to her and he flew into a jealous rage, breaking down the bedroom door.

She claims Deondre picked her up and threw her to the ground, cutting her forearm. He then tried to physically kick her out of the residence.

The woman claims she found out at the hospital (after the incident) she was 9 weeks pregnant with a child she believes to be Deondre's.

The responding officers ultimately couldn't determine who was telling the truth -- so no one was arrested.