Justin Bieber's dad was the one getting married, but just as many eyes were on his son and Selena Gomez ... whose PDA during the festivities set off wedding bell alerts.

Justin and Selena were inseparable during Jeremy Bieber's wedding Monday in Montego Bay. We're sure JB didn't want to upstage his old man ... but, let's face it, when he and Selena are all over each other the way they were ... it's gonna draw a lot of attention.

As for the other happy couple -- Jeremy and his bride, Chelsey Rebelo, went with the Jamaican flow for wardrobe -- white shirts and pink shorts with matching bow ties.

As we reported, the younger Biebs didn't make a toast, but you can tell from these pics ... everyone was still plenty entertained.

No word on if Chelsey tossed her bouquet, and if Selena made a play for it.

Congrats to the happy couples. 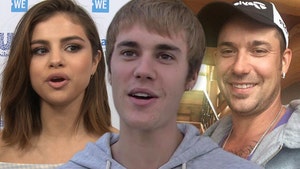 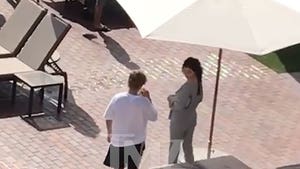