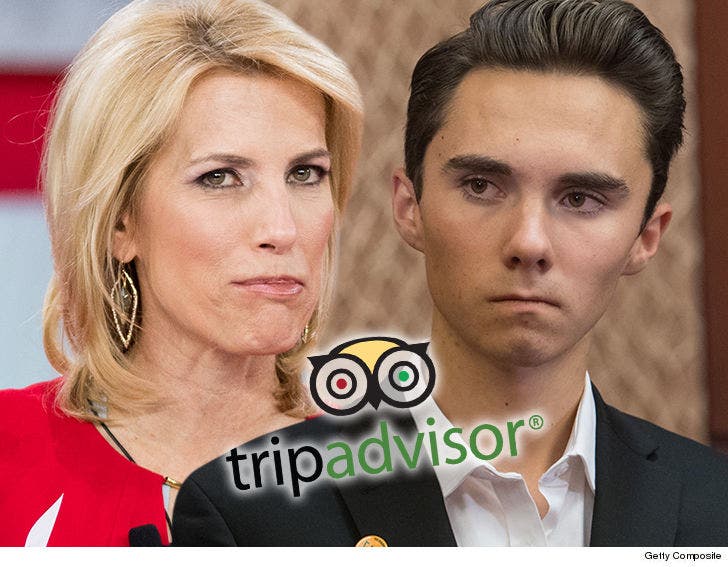 Laura Ingraham's show is taking a hit for her going after Parkland leader David Hogg ... TMZ has learned.

The FOX News host has lost the backing of TripAdvisor, a key advertiser on her show. The move comes on the heels of what some feel was Ingraham cyberbullying 17-year-old Hogg. A TridAdvisor rep tells us ... it doesn't condone her inappropriate comments, adding, "In our view, these statements focused on a high school student, cross the line of decency."

In the more bad news department, for Ingraham ... the pet food line Nutrish, owned by Rachael Ray, also announced Thursday it's pulling ads from her show.

As we reported ... Hogg called for a boycott of Ingraham on the heels of the anchor tweeting Hogg whined about getting rejected by 4 colleges, and called out specific companies like TripAdvisor, AT&T and Hulu asking why they support cyberbullying.

For the record -- Hogg was not whining.

10:20 AM PT -- Laura's now apologizing for "any upset or hurt my tweet caused [David] or any of the brave victims of Parkland."

Any student should be proud of a 4.2 GPA —incl. @DavidHogg111. On reflection, in the spirit of Holy Week, I apologize for any upset or hurt my tweet caused him or any of the brave victims of Parkland. For the record, I believe my show was the first to feature David...(1/2)

... immediately after that horrific shooting and even noted how "poised" he was given the tragedy. As always, he’s welcome to return to the show anytime for a productive discussion. WATCH: https://t.co/5wcd00wWpd (2/2)