Khabib Nurmagomedov ain't gonna walk from the UFC because Dana White ain't gonna fire his teammates for the UFC 229 brawl -- at least not yet ... so says Tyron Woodley.

Tyron believes the bigger priority for the UFC is to book the Khabib vs. Conor rematch -- and the organization isn't gonna do anything to mess that up.

As we previously reported, Khabib said he would quit UFC forever if Dana fired his teammate, Zubaira Tukhugov -- a UFC fighter who stormed the Octagon after Khabib's victory.

Dana has not said what he'll do -- but Tyron strongly believes Zubaira's job is safe for now.

"I think what happens is [Khabib's] teammates and his brothers in crime are going to at least have employment until 'Khabib vs. Conor 2' happens," Tyron said on "The Hollywood Beatdown."

"I don't think anybody is gonna be cut from the UFC."

Tyron tells us how he thinks everything will play out after the incident -- including what will happen with Conor McGregor.

And, get this ... Tyron did the whole show from his DOCTOR'S OFFICE!!!

The UFC welterweight champ -- and his mom -- give the lowdown on his injury and recovery. Ya don't wanna miss this one.

Check out "The Hollywood Beatdown" every Friday on the TMZ Sports YouTube channel. 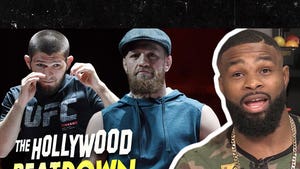 Conor's $50 Million Check Is Great For Me, Says Tyron Woodley 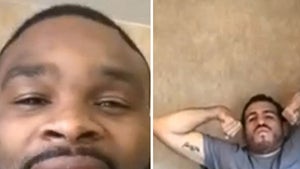