IT DOESN'T MATTER IF YOU LIKE HIM ... because he busted out The Rock's legendary PEOPLE'S ELBOW during his open workout on Wednesday -- and it's fantastic!!

Adesanya was getting the crowd in Australia hyped up for his big fight with Anderson Silva at UFC 234 on Saturday ... and put on a little tribute to his favorite WWE superstars in the process.

First, he busted out Stone Cold Steve Austin's famous Stone Cold Stunner -- then after laying the smackdown on his training partner, gave the crowd a little People's Elbow.

CAN YOU SMELLLLLLLLALALALALALA ... WHAT ISRAEL ADESANYA IS COOKING?!!! 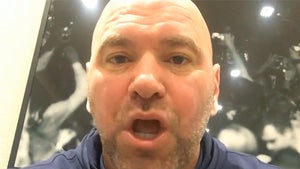