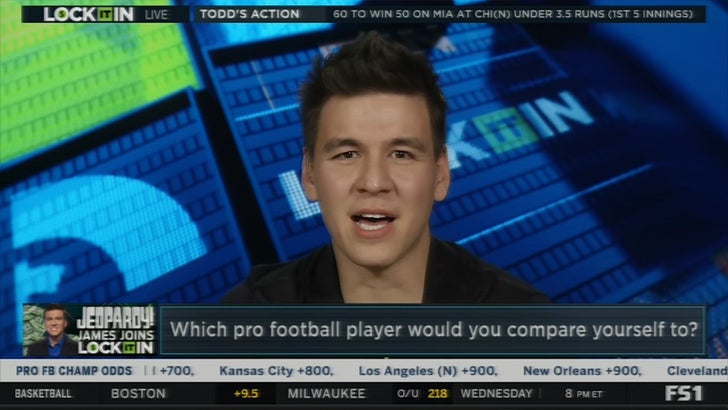 "Jeopardy" phenom James Holzhauer says if he had to compare himself to a pro athlete, he'd DEFINITELY go with DeShaun Watson ... because he can do it all!!!

Holzhauer -- who's chasing Ken Jennings for most winnings in "Jeopardy" history -- appeared on FS1's "Lock It In" on Tuesday to talk about his pre-game show life as a pro sports bettor.

During the show, Holzhauer said he was a hardcore online poker player before making the jump to sports gambling -- but now he puts together complex mathematical models to find an advantage when it comes to wagering on games.

Holzhauer says he bets on everything from football to hockey to college basketball -- and LOVES to make in-game wagers because he thinks he has an edge because the oddsmakers don't have enough time to set an accurate line.

And, just to prove he ALWAYS wins, Holzhauer told the guys he bet on the Rams to beat the Saints in the 2018 NFC championship game ... but he had 3.5 points, so he didn't care which team kicked the winning field goal in overtime!!!

One last thing ... Holzhauer wasn't afraid to talk TRASH to the hosts of the show. When asked which host would do the best on "Jeopardy," James told the group whichever person is smart enough to "keep your trap shut" for the entire game so they wouldn't fall below $0.