Alec Baldwin says he never punched a man during a heated parking space dispute -- despite what the guy claimed -- so now Alec's suing the guy for defamation.

According to the lawsuit -- obtained by TMZ -- the "SNL" star claims Wojciech Cieszkowski repeatedly lied about what went down during the 2018 spat.

Baldwin says, "When two New Yorkers get into an argument over a parking space, typically what happens is they exchange a few sharp words and then move on with their lives. But that is not what happened here. Cieszkowski has instead made up a false story about the encounter and refused to move on unless Baldwin succumbs to his extortionate demands."

As we reported ... Baldwin says the whole thing started when Cieszkowski pulled into a parking spot and came way too close to his wife and child waiting on the curb.

Baldwin does fess up to "lightly" pushing Cieszkowski during the dispute but says his opponent then lied to cops, claiming he was badly assaulted. Baldwin points to hospital records and video surveillance footage to back up his side of things. The video seems to back up his story.

Baldwin cut a deal with prosecutors earlier this year and was only charged with harassment in the 2nd degree. He was sentenced to just a few anger management courses ... but now he wants a jury to decide if he's the victim ... of defamation. 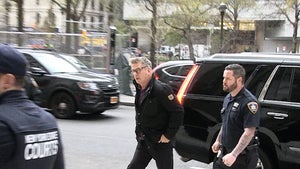