7:52 PM PT -- Kanye's Sunday Service at the Lakewood Church is winding down, and it was quite a show that the choir/collective put on ... with a late-game surge from Ye himself.

The performance went on for 2-plus hours, and the choir did a bunch of covers, including some of Kanye's tracks -- past and present -- as well as some other classic songs they remixed into gospel songs ... some of which worked perfectly, while others came off a little weird.

For example ... the choir covered Stevie Wonder's "Overjoyed" -- which sounded just fine in a gospel setting. But, when they turned SWV's "Weak" into a spiritual song, it was awkward. One of the big highlights was when the choir did Destiny Child's "Say My Name" ... which translated pretty smoothly into a tune about calling God's name.

As we said, there wasn't much sign of Kanye being embedded into the performance to begin with, but he was certainly onstage and later did get on the mic for "Father Stretch My Hands Pt. 1" and finished strong by rapping his verses from "Selah," "Follow God," "God Is" ... and a direct shout-out to Rodney Reed to boot. Ye even DJ'd and free-styled a bit too.

He definitely took the reins in the second half of the show, and got more and more and more into his element. He closed things out with "Jesus Walks" and "Closed on Sunday."

Joel Osteen got onstage to break up the music a bit, and shared several lessons about allowing God to guide oneself to greatness, despite haters along the way.

All in all, the Osteen/Kanye Sunday Service experience can go down in the books as a resounding success.

6:03 PM PT -- Kanye's Sunday Service has started, and it kicked off with a bang. A spoken word poet delivered a powerful message to open the show, and the rest of the choir took it the rest of the way ... first going in on an operatic chant, then moving on to cover 'Every Hour' from the 'JIK' album, as well 'Ultralight Beam' and eventually performing a part of 'Power.'

There's no sign of Kanye quite yet, but ya gotta imagine he's in the building ... 'cause Kim and the kids are down below in the front row. The crowd seems to be loving so far, BTW ... and as expected, it's a completely packed house.

Kanye West is about to perform his Sunday Service at Joel Osteen's megachurch in Houston ... and TMZ is streaming it live.

As we previously mentioned ... Ye brought his choir out for the weekend trip, where they're set to take the stage at 7 PM CT (5 PM PT) at the Lakewood Church -- a place thousands of worshipers come out each week to hear Joel and co. preach from the pulpit.

It's bound to be a packed house again for Sunday's ticketed event, especially after Ye made an appearance in the morning ... standing shoulder-to-shoulder with Joel and talking God.

You'll recall ... it was an eventful chat Kanye and Joel had onstage, with Ye touching on everything from his own upbringing in the church, to how he's an employee of God's now, and even going to bat and defending Joel and his reputation in the Christian community.

Ever since Kanye dropped his new album, 'Jesus is King,' he's been performing pretty consistently with his choir ... playing a bunch of his new songs too, of course. The format thus far has been pretty similar in style to what we've seen in Calabasas and elsewhere.

But with such a big audience tuning in this time around -- and a just-announced opera on the horizon -- it'll be interesting to see what surprises Kanye and his team have in store for the Lakewood congregation. 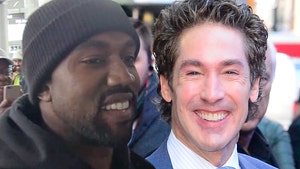