Tyron Woodley says he was "disgusted'" with the Kamaru Usman vs. Colby Covington fight ... admitting, "I wanted to throw up [over] the fact I lost to Usman."

The former UFC welterweight champ spells it all out on this week's 'Hollywood Beatdown' -- saying both guys looked weak during their UFC 245 title fight ... and neither man fought smart.

Woodley also says when it comes to power -- neither guy showed anything special, despite the fact Kamaru broke Colby's jaw in the 2nd round.

The champion @USMAN84kg turned up the heat in the fifth round 🔥 #UFC245 pic.twitter.com/QTjzkXCT7e

"If I would have punched Colby, he may be on life support right now."

Of course, Usman is the guy who beat Tyron to take his welterweight belt back in March. Tyron hasn't been back in the Octagon since ... but says he's looking for a big-money fight, even if it's in the boxing ring.

Woodley says he's getting his boxing license in California and Nevada and is seriously hoping to land a fight with Canelo Alvarez.

There's a lot more in this episode ... from Tyron's thoughts on Conor McGregor vs. Cowboy Cerrone to his upcoming plans with the FaZe Clan and why he's got a ton of respect for Jorge Masvidal.

Check out 'The Hollywood Beatdown' on the TMZ Sports YouTube page. 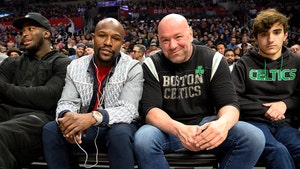 Floyd Mayweather 'Coming Out of Retirement' in 2020, Working with UFC 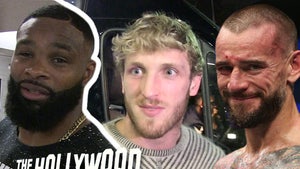