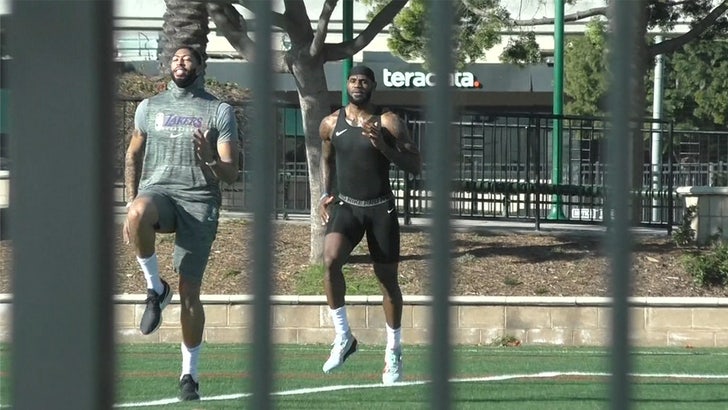 LeBron James is back to doing what Kobe Bryant would probably want him to do -- putting in work at the Lakers practice facility to gear up for his big game on Friday.

Bron and Lakers teammate Anthony Davis were grinding hard outside the team facility in El Segundo, CA on Wednesday ... working on their abs, footwork and even doing some soccer drills.

The Lakers haven't played since Saturday -- and a game scheduled for Tuesday was postponed in the wake of Kobe's death.

But at this point, the Lakers are still scheduled to play on Friday at Staples Center against Carmelo Anthony's Portland Trail Blazers ... in what will certainly be an emotional event for the players and the fans.

We're told the Lakers are planning on paying tribute to Kobe in some way on Friday, but the details are still being worked out. You can expect a moment of silence at the very least.

The last time LeBron took the court, he passed Kobe on the NBA's all-time scoring list ... moving up to #3.

After the game, Kobe tweeted at Bron saying, "Continuing to move the game forward @KingJames. Much respect my brother."

Kobe was not only close with LeBron and several other Lakers players, but was super-tight with Carmelo. And he played with Trevor Ariza during TA's time with the Lake Show.

Bottom line ... Kobe's fingerprints will be all over Friday's game, and the world will be watching.