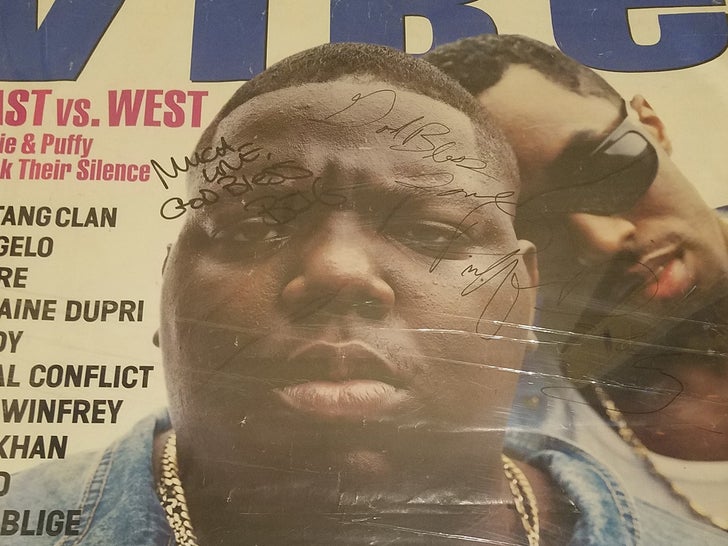 Got the itch for some old school hip-hop vibes? Ya better be rich 'cause that's what it'll take to land this Vibe poster ... signed by The Notorious B.I.G. and Puff Daddy on the night Biggie was tragically gunned down.

The folks over at Moments in Time are brokering the sale of this 2-foot by 3-foot poster of the iconic September 1996 Vibe magazine cover ... featuring Biggie and Puffy. It was signed at an industry party hosted by Quincy Jones' Vibe magazine on March 8, 1997, at the Petersen Automotive Museum in L.A.

We're told a record executive brought the poster with him that night and had Biggie and Puffy sign it. But, just hours later -- after the party was shut down at 12:35 AM by fire marshals citing overcrowding -- Biggie was shot 4 times in a drive-by while at a red light on Fairfax and Wilshire Blvds. He was pronounced dead at 1:15 A.M.

Fast-forward to the present ... the son of the record executive is unloading the poster and the asking price is a cool $54k. The memorabilia also includes Biggie's itinerary for his west coast trip as well as the party's invitation.