As cops try to figure out who targeted Pop Smoke for death ... we know the rapper shut down one of his own performances just days before his murder out of concern there were gang members in the audience.

Pop was scheduled to play the Kings Theatre in Brooklyn last Sunday night, but took to Instagram just before the show to cancel. Pop blamed it on cops, saying, "Unfortunately NYPD wouldn't let me perform."

Our law enforcement sources say it wasn't the NYPD that shut the show down ... they say the decision was made by Pop himself. The rapper was out on bail in a federal car theft case and was ordered to stay away from gang members, so cops say canceling the show was really self-preservation.

There's been a buzz in L.A. among Pop's circle that gang members might be behind his murder. The fact that Pop himself had concerns about gang members was something that has not escaped the attention of police. 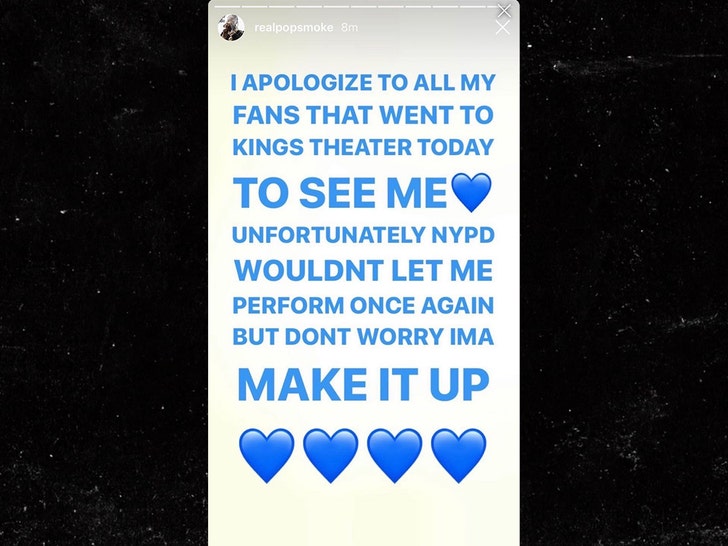 TMZ broke the story -- the feds busted Pop last month for allegedly transporting a stolen Rolls-Royce -- and that's why he was on bail.

As we first reported ... Pop Smoke's death appears to be a targeted hit based on accounts by those who saw surveillance footage from outside the Hollywood Hills home where he was gunned down.

Pop Smoke's family had no clue if he had any enemies in L.A. The case remains under investigation.