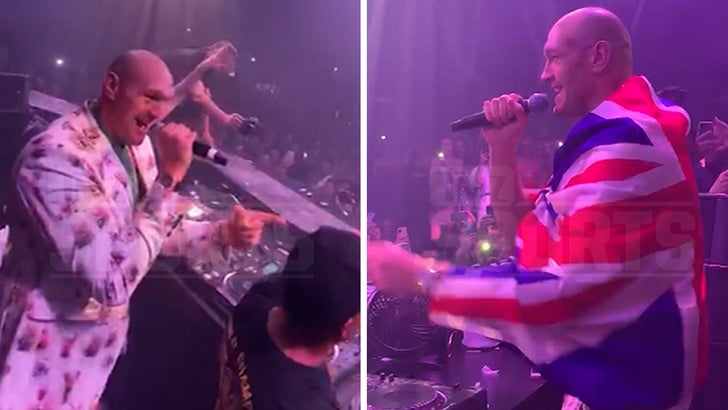 9:52 AM PT -- 2/23 Fury went on to celebrate his victory at Hakkassan Nightclub at the MGM Grand. Around 1 AM, he rolled in with a crew of 50 people including his brother and former “Love Island” star, Tommy Fury.

After enjoying a couple bottles of Grey Goose and Dom Perignon, Fury took the stage with EDM icon Steve Aoki. He lead the crowd in an epic rendition of “Sweet Caroline” by Neil Diamond, followed by Don Mclean’s “American Pie.”

Fury wasn’t the only champion in attendance, Kansas City Chief players Patrick Mahomes and Travis Kelce were there also living it up. Former One Direction singer Liam Payne was also there. The party came to a close around 2:30 AM ... but surely there will be more celebrating for Fury & co. to come

The boxing star not only beat up Deontay Wilder in their heavyweight clash Saturday night -- he LICKED THE BLOOD off Wilder's neck during the fight!!

31-year-old Fury had dominated from the start -- teeing off on the Bronze Bomber (and likely busting his eardrum in the process) in their highly anticipated rematch.

Wilder was dripping blood all over the place -- and during the 6th round, Fury flicked out his tongue and began licking the blood off of Wilder's bloody neck!!!!

Is Tyson Fury trying to lick the blood off the neck of Deontay Wilder 😂😂😂😂 #WilderFury2 pic.twitter.com/qgIrfPuhfK

It was super gross -- and Fury loved it.

Wilder's corner ultimately threw in the towel in Round 7 -- it was clear Deontay just didn't have it Saturday night.

After the fight, Fury's crazy antics continued ... he grabbed the mic and sang Don McLean's "American Pie" while encouraging the Vegas crowd to sing along! The place went nuts!

Fury praised Wilder as a great fighter and said he thinks Deontay will be champion again -- but for now, Tyson reminded everyone why he's the "Gypsy King."

Still, the tongue thing was super gross ... your highness. 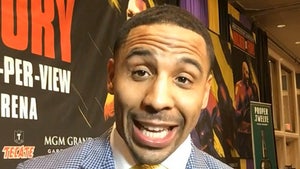