The right-hander was NOT, however, injured ... Boone says.

"Germán is fine," the Yanks head man told reporters at NY's spring camp. "He was in the car, in the back seat on the driver's side. He's been to the complex in the D.R., he's been checked over, and he's fine.”

German has been training in the DR away from his Yanks teammates in Florida, because he's still in the middle of an 81-game suspension he was hit with for violating the MLB's domestic violence policy last year.

It's unclear if others were injured in the accident -- Yankees officials have still not released a formal statement on the matter. 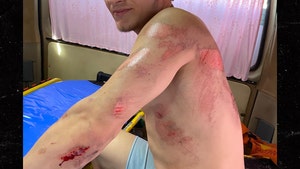 UFC's Movsar Evloev In Bloody Motorcycle Crash, Out of UFC 248