An E.R. doctor who dared to sound the alarm his hospital did not have enough PPE's to protect hospital staff has been fired ... according to the doc himself.

Dr. Ming Lin says he was given his walking papers from PeaceHealth St. Joseph Medical Center in Bellingham, Washington, after he pled with folks on social media and other outlets for the hospital to get more gloves, masks and other items that protect doctors and nurses from contracting the coronavirus. As you know, the disease has hit Washington state with a vengeance.

Dr. Lin, who worked at the hospital for 17 years, says he was unceremoniously fired by a supervisor who told him, "You've been terminated."

Dr. Lin reportedly took it in stride, telling the Seattle Times, "It's a blow to my ego more than anything."

Lin had been very critical of the hospital, saying it wasn't protecting the staff. He claimed on social media the hospital would not screen patients outside the facility for COVID-19 ... so when they got in the E.R. safety became a crapshoot.

He says he was given an ultimatum earlier this month ... take his social media posts down, or else. He chose the latter. 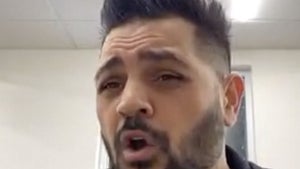 You Might Want to Rethink Fired Nurse! Health Coronavirus