Coronavirus Has Made the Earth Quieter, Seismologists Say

People say the coronavirus pandemic has had a seismic impact on our way of life -- and they're 1,000% right ... because seismologists are noticing how damn quiet it's gotten.

A geologist and seismologist named Thomas Lecocq, who works at an observatory in Brussels, Belgium, has noted the change in the vibrations he and his colleagues were recording from the Earth's surface -- saying they've reduced significantly since mid-March.

Of course, that's when most everyone else outside of China -- which was already grappling with the outbreak since at least February, if not sooner -- started implementing stay-at-home orders, quarantining guidelines, and in some cases ... nationwide mandatory lockdowns.

Our staff is teleworking. The earth continues shaking. Ground movements at frequencies 1-20 Hz, mainly due to human activity (cars, trains, industries,...) are much lower since the implementation of the containment measures by the government. #StayHome @ibzbe @CrisiscenterBE pic.twitter.com/pGgQAyLuUP

The Belgium study goes on to say vibrations in that immediate area caused by human activity has fallen by at least a third in recent weeks, which means people aren't driving on the roads, walking about ... or cranking their machines nearly as much as they normally do.

Needless to say, that same finding is probably being seen around other parts of the world, including here in the U.S., where we're always zooming around, especially on the coasts.

Long story short, coronavirus might actually help us ward off and prepare for natural disasters that we can now hear coming from a mile away. 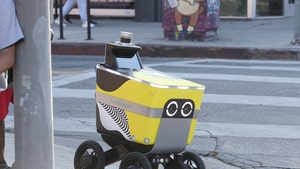 You Might Want to Rethink Weird News Viral News Coronavirus