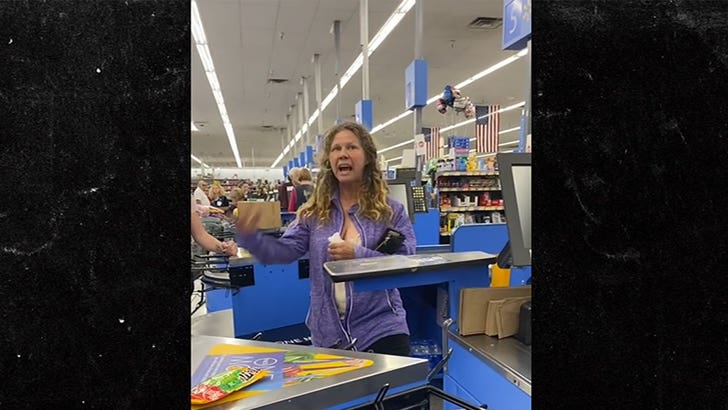 This is a terrifying scene for every store clerk these days -- a woman coughing and spitting in rage while checking out at a California Walmart!!!

The crazy altercation went down in Yreka, CA when the woman got into a spat over her bill while she was at the register this past week. Apparently, she felt she was overcharged and wanted to glance at the screen, but the Walmart worker told her to back up. That's when the spit started hitting the fan.

A manager walked over and tried to calm her down, but the woman spun into a full-blown meltdown ... suddenly beginning to cough and SPIT on a Walmart staffer ... who immediately dialed 9-1-1.

If you thought that was crazy, just watch the cringe-worthy aftermath of her trying to explain why she did what she did. Spoiler ... it's got something to do with a crackpot theory about dispelling phlegm, to get rid of the virus. She also brought up "dumb blondes."

Anyway, there's more ... but we'll let you watch. Eventually, cops reportedly arrived and escorted her out. It's unclear if she was arrested.

You Might Want to Rethink Crime Viral Controversial S#!T Coronavirus