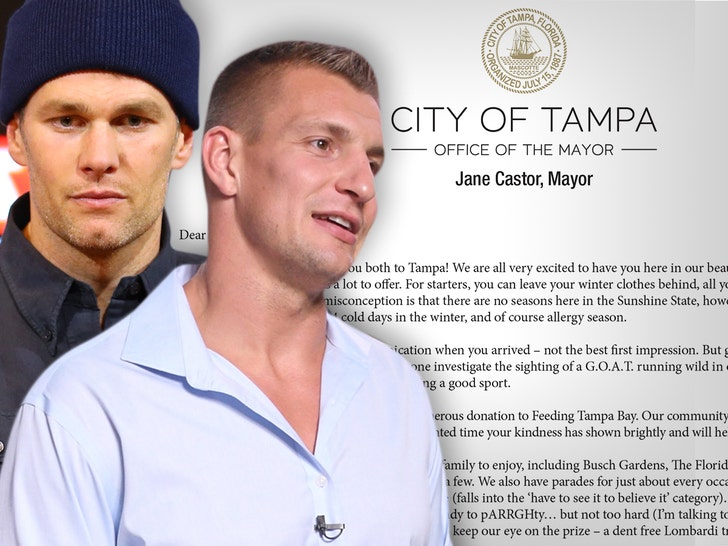 Tom Brady and Gronk just got a personal welcome from none other than the Mayor of their new home -- Tampa, Florida -- but it didn't come without a warning to both.

Mayor Jane Castor penned her open letter, telling the Boston expatriates/ex-patriots about the awesome things they can do in her fair City, but then she schooled the G.O.A.T., saying, "Tom, my apologies for the miscommunication when you arrived – not the best first impression. But, given my law enforcement background, I couldn’t help but have someone investigate the sighting of a G.O.A.T. running wild in one of our beautiful city parks. No harm – no foul, and thanks for being a good sport."

And, then there's Gronk. Mayor Castor wrote about one of the largest parades in the city, which is pirate-themed, saying, "You must be ready to pARRGHty ... but not too hard (I'm talking to you Gronk), as Super Bowl LV is the following weekend and we need to keep our eye on the prize -- a dent free Lombardi trophy!"

But, Her Honor wasn't done, adding, "There is plenty for you to do as well Gronk. Although we have to socially distance right now, in no time you will be able to enjoy our nightlife and eclectic neighborhoods ... Just remember 'No Shirt, No Shoes, No Service' is still in effect around here." Gronk, you've been warned!

And, then a message to both ... "We are so glad to have you here. While most people retire and come to Florida, you came out of retirement to head our way. That shows the competitive mindset we are used to, while sticking it to the AARP at the same time. Looking forward to growing used to the Gronk Spike!"

Brady had an interesting week. As TMZ reported, he went to visit one of his new coaches and ended up walking into the wrong house -- it's kind of a Stepford community -- and came face-to-face with a very shocked dude.

But, talk about an endgame ... here's what the Mayor obliquely offered -- "Tom, It’s Tampa Bay. You win us a Super Bowl and we’ll discuss Tampa Brady."