Rob Gronkowski's run as WWE's 24/7 champion came to a screeching halt on Monday -- when he was pinned by R-Truth while shooting a TikTok video.

Gronk -- who won the belt at WrestleMania 36 back in April -- has since unretired from football and signed a contract with the Tampa bay Buccaneers. So, it seemed like it was only a matter of time before someone else took his WWE belt.

WE HAVE A NEW #247CHAMPION AND HIS NAME IS @RonKillings!!!@RobGronkowski didn't see THAT coming! 😲😂#WWERaw pic.twitter.com/e8uWkbQsLS

And, that time came on "Raw" ... while Gronk and his pal Goon began to shoot their TikTok, R-Truth was waiting in the yard while disguised as a gardener.

Suddenly, Goon unzipped his shirt -- revealing an official WWE referee uniform -- and R-Truth came firing in for a surprise pin.

"You gotta be serious man," Goon said after he counted Gronk out ... "You got a new career starting! You're with the Bucs now!" 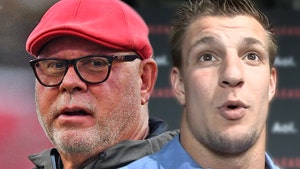