Warning -- this is VERY hard to watch.

11-year-old skateboarding sensation Sky Brown was rushed to a California hospital Thursday after crashing to the ground during a ramp trick gone wrong.

Brown suffered skull fractures, a broken wrist, broken hand and a black eye ... but somehow, she's in amazing spirits about the whole thing and posted an update Monday from her hospital bed.

"I don’t usually post my falls or talk about them," Brown said ... "but this was my worst fall."

"And I just want everyone to know that its okay, don’t worry I'm okay."

"I'm just gonna get back up and push even harder."

Brown has been pushing to make England's skateboarding team when the sport makes its Olympic debut at the Tokyo Games in 2021.

Her father spoke with the media and described the incident -- saying "Sky landed head-first off a ramp on her hand."

"When she first came to hospital, everyone was fearful for her life."

Sky's dad noted she's "lucky to be alive" -- and "she remain positive and strong."

"The whole medical team is shocked to see her positivity." 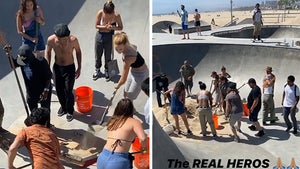 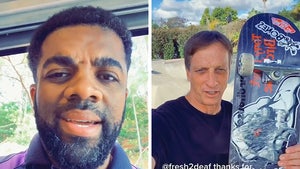