Amen Ogbongbemiga -- a superstar on Oklahoma State's football team -- says he tested positive for coronavirus ... this after he attended a protest in Tulsa, Okla.

The linebacker -- who was voted the Cowboys' defensive MVP in 2019 -- revealed the diagnosis Tuesday, shortly after several OSU players were tested this week.

Ogbongbemiga says he was careful while around others during the protest, claiming he was "well protective of myself" ... but he implored others to take precautions while out demonstrating in large groups.

"Please," the football player said, "if you are going to protest, take care of yourself and stay safe."

Ogbongbemiga will now have to quarantine in special on-campus housing at Oklahoma State -- according to reports -- and he'll be retested for the virus later this week.

Of course, Cowboys players are taking coronavirus tests in preparation for team workouts later this month ... as Big 12 officials are allowing teams to return starting June 15. 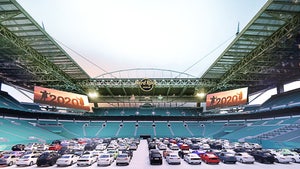