7:38 PM PT -- Crawford's attorney, Rusty Hardin, tells us his client is innocent, saying ... "We strongly deny the charges and the conduct he is alleged to have engaged in. He would never hurt a woman. He has no criminal history."

Carl Crawford has been arrested for felony domestic violence in Texas stemming from a May incident where he allegedly choked his ex-girlfriend at gunpoint ... this according to court documents obtained by TMZ Sports.

The alleged victim claims she had recently broken up with the former MLB star after a two-and-a-half-year relationship, but agreed to meet with him on May 8 at her Houston, Texas apartment to talk things out.

When Crawford arrived, the woman claims he removed a semi-automatic handgun from his pocket. She then claims Crawford "unloaded the clip and ejected a round of the pistol and began walking towards her holding the firearm."

The woman says Crawford was visibly upset ... and claims the former MLB star began interrogating her, warning her that "if she lied to him that he was going to hurt her."

The woman says she tried to leave her apartment ... but says Crawford pushed her down to the ground in the hallway.

Crawford, per the docs, then "held the gun in one hand, and used the other hand to grab her by the head and neck, while asking her how long she had been dating a male acquaintance."

When she says she replied that she only knew the other man for a week, she claims Crawford accused her of lying and slammed her head against the wall several times.

While still holding the gun, Crawford allegedly began to squeeze the woman's neck while asking, "how long had she been having sex with the male."

The woman says she felt like she was about to pass out when her 1-year-old daughter walked over to her, which allegedly distracted Crawford long enough for her to get up and flee the scene.

She claims Crawford also fled, but left his gun at the scene. Cops were called -- and according to the docs, they observed pink areas on the woman's neck and an injury to her right hand.

After the incident, the woman says Crawford continued to send her menacing text messages ... saying, "That wasn't a beating u just mad I made u confess."

Crawford also allegedly texted that he was paying someone to track down the other male.

Officials in Harris County hit Crawford with a charge of assault of a family member - impeding breathing ... and he surrendered to authorities on Thursday, June 4.

We've reached out to Crawford's reps for comment ... but so far, no word back yet.

As we previously reported ... just days after the alleged incident, on May 16, a child and a woman tragically drowned at the former L.A. Dodgers outfielder's Houston, Texas home.

In a statement addressing the accident, Crawford wrote, "My Hearts Heavy. The tragic events that occurred at my home will be with me forever. I'm at a loss for words I've struggled all week to manage my emotions and I keep thinking of the families of those who've passed and their grief, I know they have it the hardest."

He continued, "They are the first and last thing I think of these days. Please keep them in your prayers, I know they will always be in mine." 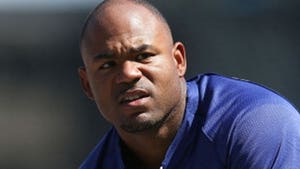