Fourth of July events in America will be few and far between as cities and states have called off big celebrations and fireworks displays, but for U.S. embassies all over the world ... it's party on.

TMZ did some digging, and we've learned at least 5 embassies have dropped some serious cash to celebrate July 4 ... despite renewed COVID-19 shutdowns here in the states.

According to federal procurement docs ... the U.S. Embassy in Madrid spent $67,551 on "mapping services for 4th of July celebration," while Hong Kong has an expense of nearly $50k for "Independence Day reception 2020."

Some U.S. Embassies are going a different route by throwing virtual parties due to the pandemic ... including Berlin, Mexico City and Managua.

As you may know, cities across the country -- from Boston and Chicago to Seattle and L.A. -- have canceled Fourth of July events and fireworks shows to keep crowds from gathering as coronavirus cases are rising again.

However, as we told you, that was not the case for President Trump's highly touted celebration Friday at Mount Rushmore, which cost upwards of $600k ... but probably a lot more. 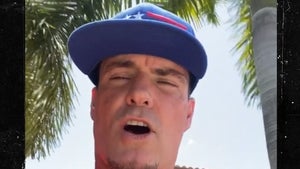