Donald Trump appears to have real issues with the Redskins and Indians for considering name changes ... saying Monday he believes the nicknames are signs of strength for the teams.

Both Washington's NFL franchise and Cleveland's MLB squad announced over the weekend they will have discussions about changing their monikers in the wake of America's social justice movement.

But, Trump seems to have problems with that ... writing on his Twitter account, "They name teams out of STRENGTH, not weakness."

"But now the Washington Redskins & Cleveland Indians, two fabled sports franchises, look like they are going to be changing their names in order to be politically correct."

As we previously reported, the Redskins have faced HEAVY pressure over the past few weeks to change their name ... with both Nike and FedEx expressing concerns over it all.

Also, Fawn Sharp -- president of the National Congress of American Indians (which represents more than 500 tribal nations) recently said the Redskins name is VERY offensive and called for players to boycott.

Owner Dan Snyder said Friday the team will look into it ... and just hours later, the Indians piggybacked on the Redskins' statement, saying they, too, would go forward with internal discussions as well.

Several famous players and coaches have backed name changes for both teams ... with Indians manager Terry Francona even saying Sunday, "I think it's time to move forward." 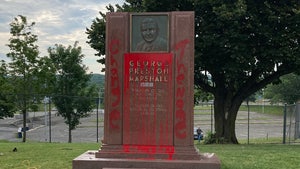