A University of Toleda football player was shot and killed outside of a pizza restaurant in Ohio Tuesday ... and cops are still on the hunt for the killer.

The victim is 22-year-old Jahneil Douglas -- a defensive lineman for the Rockets who was expected to have a big role on the team this upcoming season.

Officials say there was a fight outside of Gino's Pizza in Central Toledo around 11:30 PM -- and during the altercation, gunshots were fired and Douglas was hit.

The football player was rushed to a nearby hospital, where he later died, according to WTOL.

So far, no arrests have been made -- cops are currently investigating and hoping to track down the shooter ASAP.

Douglas was a standout player at Start HS in Toledo ... earning 1st-team All-Ohio honors during the 2016 season.

Rockets head coach Jason Candle released a statement on Douglas' death ... saying, "The Toledo Football family is heartbroken by the loss of Jahneil."

"He was a hard-working young man who was loved by all his teammates and coaches. Our sincerest condolences go out to Jahneil’s family and friends during these difficult times."

"Jahneil will forever be a part of the Rocket Football family." 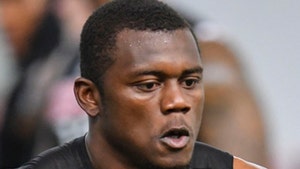