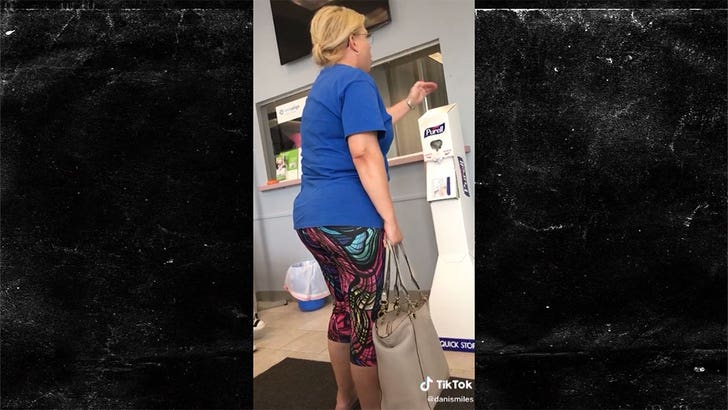 Consider this a PSA for all "Karens" out there ... you most certainly CAN be legally refused service for not wearing a face mask inside a private business -- just like this woman.

It's unclear when this incident went down or where but the video was posted on TikTok Wednesday showing a Karen going ballistic on a poor dental worker after being denied for a teeth cleaning appointment. She was told the policy is no mask, no cleaning ... and she was pissed.

Check out the video ... Karen's heard saying, "you're gonna work on my teeth, not my nose." She then tried covering her face with her hand, but that got her nowhere ... and her rage just got worse.

And, when they brought up taking her temperature before she could enter, she claimed that's illegal because dentists aren't MDs. Well, neither is your average restaurant owner, Karen, and they're taking temps too.

Anyway, the woman went on to make threats about talking to her lawyer and suing the dentist ... blah, blah, blah. Reality is ... she's out of touch with reality.

Obviously, private businesses in general have the right to refuse service to customers who violate their mask-wearing policy.

Businesses are also protected, especially if local or state governments have issued the mandate, like in New York where Gov. Andrew Cuomo signed an executive order that would allow businesses to refuse service to patrons who do NOT wear a mask.

Get it together, Karens.

You Might Want to Rethink Nurse! Viral Fairly Legal Health