"I’ve missed going out and competing with the guys," Woods said, "and can’t wait to get back out there."

It's huge news in the golf world ... Tiger hasn't swung a club on Tour since mid-February, when he finished in last place among those who made the cut at the Genesis Invitational.

After that tournament, Woods complained of back tightness ... and sat out the ensuing events until the COVID-19 pandemic put a pause on the season.

Golf returned to action in mid-June ... but Tiger passed on all the return tourneys -- only choosing to play Tom Brady and Phil Mickelson at The Match II during the layoff.

Of course, the Memorial was set to allow fans to watch Tiger in person ... but tournament officials announced this week they nixed those plans as COVID cases began spiking around the country.

Not like too many people will complain ... watching Tiger on TV instead of in-person ain't a bad consolation prize.

By the way ... Tiger dominates at the course -- he's won there a record FIVE times. So getcha popcorn ready! 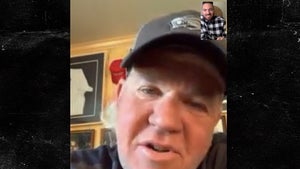