8:48 AM PT -- 7/13 -- The attorneys for Quinton Dunbar have now withdrawn from the case in the wake of the victim-bribing allegations ... this according to new court documents obtained by TMZ Sports.

In the docs ... no reason was given for Michael Grieco and Michael Weinstein's withdrawals ... but Dunbar says they've now been replaced by attorneys at Rier Jordan, P.A.

Police allege, "Grieco’s office was the background that facilitated a cash transaction that later obstructed the integrity of an investigation."

The docs say Dunbar's new attorneys have already requested discovery from the prosecutors.

As for Deandre Baker, there's been no movement with his representation ... we're told Bradford Cohen still remains his attorney in his fight against the armed robbery charges.

Cohen is also adamant his client did not participate in any scheme to pay off victims or witnesses.

NY Giants cornerback Deandre Baker is denying paying off 4 victims in his armed robbery case ... despite new allegations to the contrary.

The new claims are spelled out in a warrant obtained by the NY Daily News ... in which law enforcement officials say they have video evidence and Instagram messages which show the NFL player paid out $55,000 between 4 victims to recant their stories.

As we previously reported, Baker -- along with Seattle Seahawks cornerback Quinton Dunbar -- have been charged with multiple counts of armed robbery with a firearm stemming from a May 13 incident at a cookout in Florida.

Officials say Baker essentially worked with a witness who happened to be a longtime friend -- known as "Coach" -- to orchestrate the payouts at the office of Dunbar's attorney.

Cops say they have IG direct messages from Baker to "Coach" saying, "Yo I’m in the city now getting cash how much to bring ?? I’m tryna get there too u ASAP."

Cops say they have records which show "several phone calls between Baker and [Coach]" discussing the alleged payoff.

And, there's this ... cops also say they have surveillance video showing an unknown person arriving to the lawyer's office with a "black bag" containing a bunch of cash.

Cops say, at one point the person "opens it and removes the money and the shows the bag to "Coach."

On the same day as the alleged payoff, Dunbar's attorney allegedly contacted police to inform them 4 witnesses "have recanted their sworn/recorded statements against Dunbar."

Coincidence? The cops think not.

But, Baker's attorney Bradford Cohen tells us Baker did NOT pay anyone off ... period -- denying all of the new allegations.

Cohen says, "Deandre has been saying since day 1 that this was an extortion scene. Nothing from that day has changed."

"Any texts from [Baker] to these extortionists were made to keep them on the hook, as we informed authorities of this extortion the minute money was demanded."

"Deandre was with his attorneys, including myself, on the day in question and I was in contact with the authorities at the same time of the extortion demand."

"We have no affidavits from the alleged victims. Our affidavits are from independent witnesses."

Cohen says Baker has also taken a lie detector test from a "nationally recognized examiner" and passed as truthful. 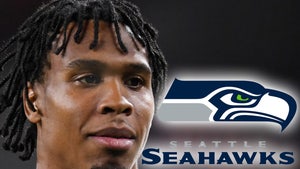 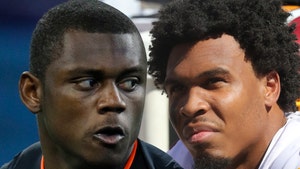