Zion Williamson has left the NBA bubble Thursday to deal with an "urgent family matter," this according to the New Orleans Pelicans.

The 20-year-old plans to return to the bubble if possible, but no word on a time table.

"He intends to rejoin the team in Orlando for the NBA restart at a later date."

Pels Executive Vice President of Basketball Operations David Griffin added, "We fully support Zion’s decision to leave the NBA campus to be with his family."

"Out of respect for the Williamson family, we will have no further comment at this time."

The Pelicans are 10th in the west and would need to go a crazy winning streak during the NBA's 8-game regular season in the bubble to have a shot at the NBA playoffs.

They're a talented young team -- and it's clear the NBA was hoping to spotlight Zion and his teammate Lonzo Ball during the restart.

Zion was the #1 overall pick of the 2019 NBA Draft -- he's the most hyped rookie since LeBron James. 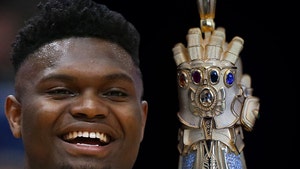