The friendly neighborhood home of the Boggs family in "Edward Scissorhands" is on the market, and though there's no sign Edward's been trimming the hedges ... there's still plenty to like about the place.

The outside of the Florida house -- featured in the 1990 Tim Burton cult classic, starring Johnny Depp and Winona Ryder -- is a different color now but still looks very much the same ... and it's listed for $224,000.

The 1,432-square-foot residence comes with 3 bedrooms and 2 bathrooms, all of which have been recently renovated ... including a completely remodeled master bath.

The house still boasts some original attributes too -- like the kitchen cabinets and countertops and, of course, all the charm showcased in the movie.

The Boggs' house -- used for exterior and interior shots -- was built in 1989, just months before filming began for 'Scissorhands' in the Tampa Bay area. It's actually in a subdivision in the suburban town of Lutz.

Hopefully, all the neighbors are nice as well ... nothing like those Esmeralda or Jim characters. 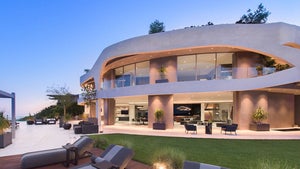