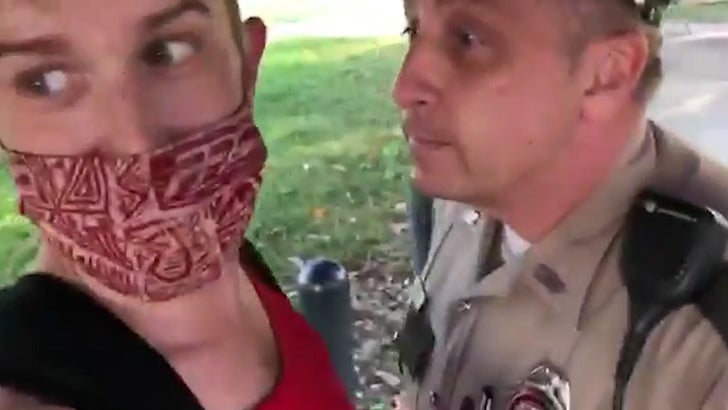 8:35 AM PT -- 8/12 -- The alleged victim, Andrew Golden, tells TMZ ... he's filed a formal complaint against State Trooper Harvey Briggs for allegedly accosting him and ripping off his face mask, just for recording a traffic stop from a safe distance.

He says he's gone to the Office of Professional Accountability in Nashville over the matter, and has even started to look into legal representation to potentially press charges against the guy. He says Briggs should obviously lose his job/be off the force, and be prosecuted too.

And, get this ... Golden says people are coming out of the woodwork to complain about Briggs after his video was posted. So it sounds like there might be more to this story than this one isolated incident.

Last but not least -- Golden says this officer was clearly in violation of the mask ordinance in Nashville (which was passed in late June) and, at the very least, should get reprimanded for that because no one is above the law. He says he can only imagine how many other run-ins Briggs has had with others.

A maskless Tennessee State Trooper went on a major power trip, going face-to-face with a man not accused of any crime ... before allegedly tearing away the man's face covering.

Andrew Golden says this went down Monday near the Tennessee State Capitol building as he was recording state troopers who had pulled over a motorist. He says he kept a safe distance away on a public sidewalk before State Trooper Harvey Briggs -- who was not involved in the traffic stop -- threw a fit.

Check out the video ... Briggs, who again is NOT wearing a mask, warns Golden about cursing in front of him. Golden, who kept recording, asked Briggs "why his hand is on his gun" ... and the cop said, "Because that’s the way it always is."

Golden claims Briggs then stepped on his foot -- all without wearing a mask, mind you -- and then, suddenly, ripped Golden's mask off his face. He immediately called out Briggs for it ... and you hear Briggs deny it as he walked away saying, "I'm tired of you people making stuff up."

Tennessee's Dept. of Safety and Homeland Security tells us it's "in the process of reviewing the matter."

You Might Want to Rethink Viral Health Police Coronavirus