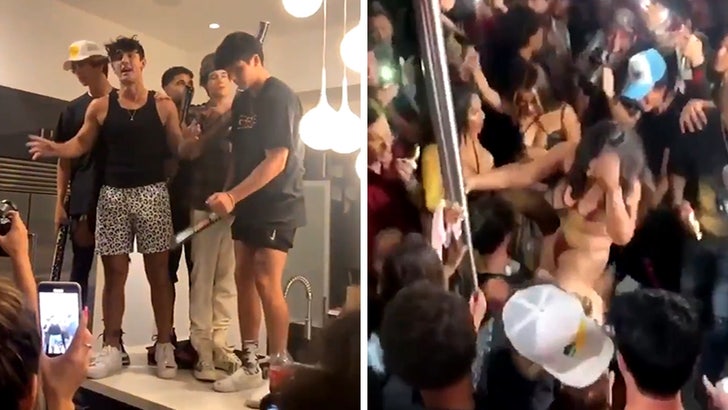 TikTok might be on the verge of shutting down in the U.S., but its American stars are far from winding down -- in fact, they're doing the opposite ... dangerously turning up.

Check out these videos that were captured Friday night from a massive house party out in the Hollywood Hills, celebrating the 21st birthday of TikToker and YouTube personality Bryce Hall. It's ridiculously packed, and of course ... no one is wearing a mask or distanced at all.

Just looking at the raucous scene -- which was full of dancing, drinking and eventually stripping too -- it's clear this isn't safe, but it doesn't look like Bryce and the rest of the (new) Sway House inhabitants really give a damn, and neither do their guests.

It's crazy ... because you literally see a lot of famous faces here -- tons of other TikTok stars and viral personalities and even some reality TV stars too, like Harry Jowsey from 'Too Hot to Handle.' Looks like it was a who's who of Gen Z fame, really. And, yes ... things got wild.

LAPD outside Bryce Hall’s party at the Sway House via @thetiktokroom pic.twitter.com/rMprzPw62k

At one point, some male strippers dressed as cops come in and dance on Bryce -- and then later, the female strippers are brought in and do more of the same. Finally, real cops showed.

Word is the shindig got shut down around 4 AM or so, when LAPD rolled through and kicked everyone out. You see this and wonder ... maybe a TikTok ban ain't that bad of an idea.