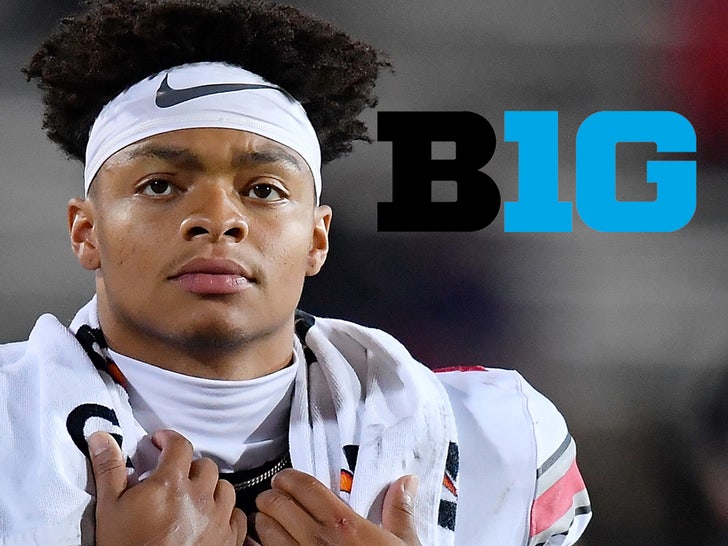 Ohio State superstar QB Justin Fields is leading a campaign to resurrect the BIG Ten football season -- saying he believes it can be done in a safe and responsible way.

The 21-year-old Heisman hopeful launched a petition Sunday aimed at the Big Ten Conference in hopes of getting officials to reconsider postponing the fall season ... and it's already racked up more than 220,000 signatures.

"We believe that safety protocols have been established and can be maintained to mitigate concerns of exposure to COVID-19," Fields said in the petition ... adding it should be up to the players to decide if they want to suit up or the season.

"Don’t let our hard work and sacrifice be in vain. #LetUsPlay!"

Fields joined ESPN Radio on Monday and said he believes if the other conferences are able to play, the Big Ten should find a way to figure it out as well.

"I think if the SEC, ACC and Big 12 all feel like we can have a season safely, I think we can do the same thing in the Big Ten."

"I don’t think it’s hit everyone that we’re not playing, but if we’re sitting at home and other conferences are playing, that’s gonna hurt down deep."

Fields adds he and his teammates want to play for the seniors who may not get the opportunity to play college football again ... saying, "We owe it to those guys first."

Fields says he's working directly with Clemson's Trevor Lawrence to find ways to move forward -- they're trying o unify the biggest names in college football to speak out together to help save the season.

"We're finally now realizing how big of a voice that we have."

As we previously reported, both the Big Ten and the PAC-12 have postponed their football seasons to at least January, which the hopes of playing a season in the spring, if the pandemic allows for it.

The goal, we're told, is two have TWO football seasons on 2020 -- the first in the spring, and the second in the fall.