President Trump's infamously elusive tax returns have reportedly seen the light of day -- and they appear to paint a portrait of Houdini-like tactics that have allegedly allowed DT to avoid paying income taxes for years ... and a grand total of $750 in his first year on the job.

The NYT claims to have obtained tax-return data extending over two decades, including 2016 and 2017 ... years they report Trump paid a paltry $750 in income taxes in each year. Prior to that -- for at least 10 of the previous 15 years -- NYT says Trump paid $0 in income tax.

An attorney for the Trump Organization disputed the Times' findings ... and called them inaccurate ... asserting Trump had paid tens of millions in personal taxes to the feds over the past decade, including millions more since announcing his candidacy is 2015.

The Times says the attorney appears to be conflating "personal taxes" with income taxes -- noting DT has paid taxes for Medicare, Social Security and taxes for household employees.

As for how it's possible that Trump could've avoided paying income taxes for all those years -- as the Times reports -- it's because, based on the filings they've reviewed, he reported losing more money than he made ... in what they characterize as "chronic losses."

The Times also reports that the returns do not show anything not previously known about Trump and Russia as far as business dealings are concerned. Just a quick glance at how much dough the dude was rolling in back in the 2000s because of "The Apprentice" and the licensing deals that followed -- the NYT says it amounted to upwards of $427 million all in. They also say some of that money was reinvested into other businesses -- including golf courses -- which have hemorrhaged cash. 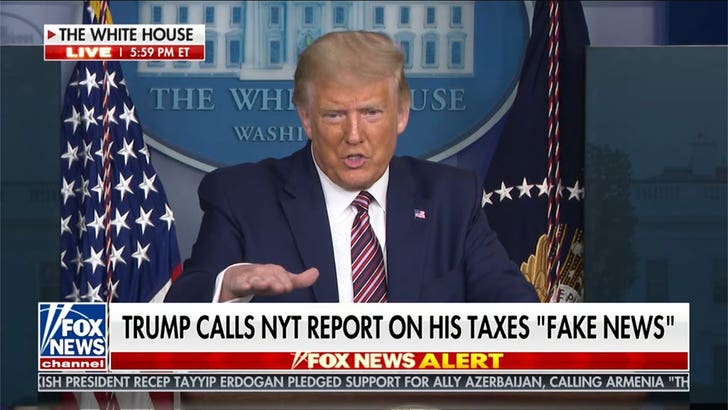 Now, Trump has already caught wind of the report -- and he's calling it the usual ... fake news.

Trump says he's currently under audit by the IRS -- which the Times confirms, and explains it could cost the Prez a whopping $100M if they find that a $72 mil tax credit he once claimed is illegitimate.

The Times says more stories about what the returns supposedly depict will come in the weeks to follow.