Some of the best basketball players to ever live will be present for Game 1 of the NBA Finals ... but, of course, they won't actually *be* there due to COVID-19.

Shaquille O'Neal, Kareem Abdul-Jabbar and more headline the insane list of NBA legends slated to be virtual fans for the Lakers vs. Heat on Wednesday ... tuning in to the game from the comfort of anywhere other than the Orlando bubble.

Seriously, there's a LOT of rings in the bunch.

On top of the champs in the crowd, there will be 40 first-time poll workers identified by LeBron James' "More Than A Vote" campaign!!

It won't be as electric as years past ... but heck, at least we have ball!! 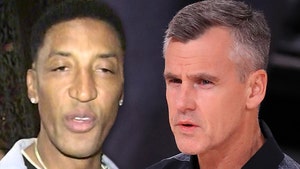