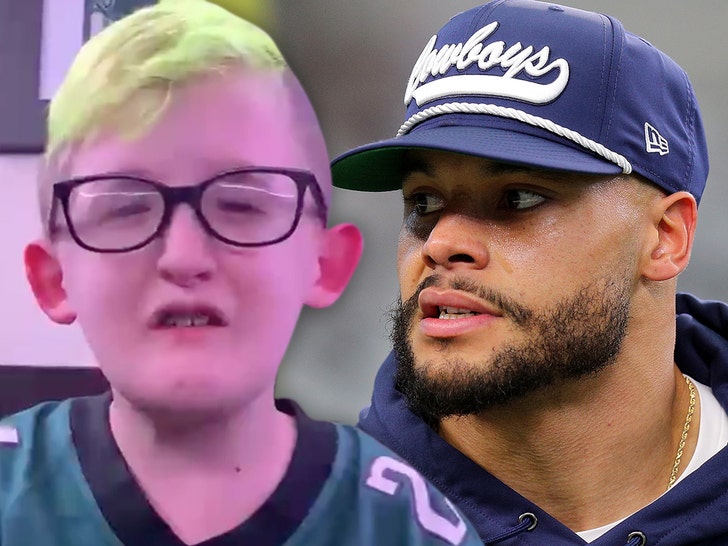 Class move from the biggest Philadelphia Eagles fan there is ...

12-year-old Giovanni Hamilton was so sad about the injury to Dallas Cowboys QB Dak Prescott, he shot a get-well message that'll hit you right in the feels.

for @dak get well soon brother and i hope u get the comeback story u deserve bro pic.twitter.com/yaZeY1U57z

Hamilton's story is pretty well known ... the way he's battled through 12 surgeries related to Schwartz-Jampel syndrome has inspired Eagles players like Carson Wentz and others.

Gio's condition has been described by his mom as a combo of muscular dystrophy and dwarfism. He's undergone surgical procedures on his hips, eyes, jaw and more.

It’s not every day you get to meet your hero.#EaglesCamp | #FlyEaglesFly pic.twitter.com/dezSoFcM9J

So, when Gio -- who's an Eagles fan to the core -- found out about Dak's ankle, he fired up his camera Sunday to make a video for the injured QB.

"I just heard that Dak Prescott got hurt and you know, it sucks," Gio said.

"I’m the biggest eagles fan there is and you never wanna see that happen."

Gio added, "Even if it’s your most hated team, you never want to see that happen to anyone -- and you know Dak, I hope you see this, Brother, I hope you’re doing okay. I’ve been through a lot of pain but I can't even imagine. That looked like it really hurt."

"I heard you’re going into surgery, I wish you luck and I hope you get that comeback story you deserve."